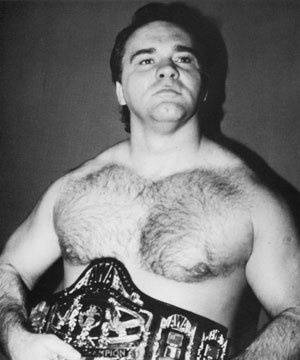 I was totally brainwashed by my childhood idols – comic book heroes like Superman, the Lone Ranger, and one of my all-time favorites, Zorro. There was no doubt in my mind that saving the
helpless from injustice, thwarting evil and winding up with the beautiful damsel in distress was what life was all about. In fact, the first thing I did to my first house was put in a secret door so I could be just like Don Diego.

Man, was I screwed up.

Nevertheless, by the time I was twelve I knew what I was destined to become. I was going to be a hero.

Zbysko was still in his teens when he met the man who would make his dreams come true: Bruno Sammartino.

There was no doubt in my mind that I could achieve my childhood dream if I emulated this guy. I’d protect the weak, stop evil in its tracks and fly above the real world like Clark Kent. That’s right, I was going to become a professional wrestler. Zbysko’s dream came true just a few years later when, at 21, he won his first wrestling match.

The fans went berserk, blowing the roof off the arena. I was victorious–in just seventeen seconds. It couldn’t have happened any other way: Bruno’s protege has just exploded onto the scene. Feeling the energy, the emotional outbursts of thousands of people in unison, I was hooked. I began to live to pop crowds. And I was
never nervous again.