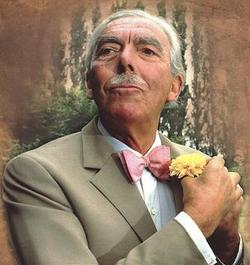 It stands to reasons that any boy born and raised in an English pub would have a good sense of humor. And Frank Muir supported that idea. Though he did poorly in school, he continued to learn on his own throughout his life, developing such a sophisticated grasp of the English language that many who heard him swore he must have had an upper crust education.

Wit is a weapon. Jokes are a masculine way of inflicting superiority. But humor is the pursuit of a gentle grin, usually in solitude.

While serving the Royal Air Corps, Muir discovered his eye for detail and for radio comedy. After his tour of duty was over he went into radio as a career, moving into television during the 1950s. He also wrote numerous books for both children and adults.  He rounded out his career with some stage work in his later life. One of his specialties throughout his career was in word play, including making up humorous definitions for common words. Strategy is buying a bottle of fine wine when you take a lady out for dinner. Tactics is getting her to drink it.